Rental Car Villeneuve Loubet
RentaCarBestPrice.com compare prices from a number of car rental companies and find the best price on car hire. Book with us and get necessary insurance and unlimited mileage included in the price. 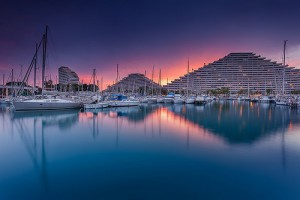 Villeneuve-Loubet is a city in southern France, 15 kilometers east of Nice and 22 kilometers west of the film city of Cannes. The town lies on the Mediterranean coast in the Provence-Alpes-Côte d’Azur in the department Alpes-Maritimes. Here live about 15,000 inhabitants.

The town was established in the 1300s around the castle Villeneuve, but archaeological digs show that the Romans were in the area before this. Villeneuve-Loubet has an art museum and a culinary museum dedicated to Auguste Escoffier, who was regarded as one of France’s matkonger. In town there is also a medieval castle from the 1300s. There is also a Provencal village was reconstructed in the 1600s here. Marina Baie des Anges is a holiday resort with a special architecture, which has received several awards. The beaches are among the city’s biggest attractions. Here visitors can rent boats, water skiing, swimming, sunbathing or a sailing excursion. There are also courses in sailing here.