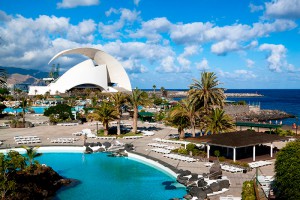 
Tenerife is the largest of the Canary Islands. It is located in the Atlantic Ocean, approx 300 km off the northwest coast of Africa – and is one of the world’s premier resorts. The capital of the island called Santa Cruz de Tenerife and has 221,627 inhabitants (2006). The climate is favorable and the temperature seldom drops below 20 degrees. Along the coast there are many popular and idyllic villages and bathing beaches is considered to be very attractive.

It is a very active and varied nightlife in Tenerife, the restaurants are known for their many and varied fish specialties. Tenerife Each year welcomed more than 5.5 million tourists, and many charter companies offer travel here in several different price ranges.

Tenerife has two airports and the busiest in the heart of the tourist area on the south side of the island. Tenerife South Airport (TFS) serve 9.1 million passengers a year (2014), and is only 17 km east of the tourist resort of Playa de las Americas. Upon arrival hall has a number of car hire offices – including Auto Reisen, Goldcar, Hertz, Avis, Europcar and Cicar.

Tenerife has a well-developed road with highways and country roads and traffic rules are the same as in the rest of Spain. It is inter alia Motorway (Autopista TF-1) which extends from the capital Santa Cruz de Tenerife in the northeast to the town Adeje in the south. There is also motorway from the capital westward to the northern coastal town of Icod de los Vinos (Autopista TF-5).

The alcohol limit on Tenerife is 0.5, in contrast to Norway with 0.2 parts per thousand limit. It is still recommended to be totally teetotaler when to drive.

Mountain Areas on the island often steep, narrow and winding roads, so here it is important to drive carefully.

Tenerife has something for everyone – whether you want to experience big city life and shopping in the capital or one prefers sun and beach holidays along the coast in the south. The car will be at ease around to the different attractions and sights and one can also take pleasant trips to nearby cities and towns.

A driving tip is to take a day trip to Teide National Park – where highest peak measuring 3718 m above sea level The national park is located on Tenerife, about 40 km southwest of the capital Santa Cruz and 45 km north of the tourist town of Playa de las Americas. The car can run up to about 2000 meters, then take the funicular railway “Teleférico del Teide” on up to the top. The national park offers breathtaking views and beautiful scenery – and one can also contemplate a volcanic crater which has a circumference of 48 km.

With a rental car you can also take a day trip to the zoo Loro Parque Tenerife – which is a great attraction for the whole family. The zoo is located north of the island, near the town of Puerto de la Cruz. Here you can see a variety of wildlife species – including the gorilla, chimpanzee, tiger, jaguar, penguin, sloth, flamingo, turtle and parrot. There is also a large aquarium with tropical fish in the zoo, and the place has entertaining shows with dolphins, killer whales and sea lions.