Rental Car Speyer
RentaCarBestPrice.com compare prices from a number of car rental companies and find the best price on car hire. Book with us and get necessary insurance and unlimited mileage included in the price. 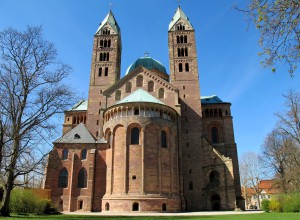 Speyer, which has approx 50,000 inhabitants (2008), situated on the Rhine in southwestern Germany – in the state of Rhineland-Palatinate. The town is first mentioned in 496 e.Kr, and is then called Spira – but already ten years BC there was a Roman military facility here.

Speyer is primarily known for its impressive Cathedral – Kaiser- und Mariendom zu Speyer – the world’s largest Romanesque cathedral. It was begun in 1030 and inaugurated in 1061. 40 years later it was expanded. Much of the church was destroyed in 1689 during a war with France, but rebuilt in the latter part of the 1700s. It has since 1981 been on the UNESCO World Heritage list.

Another major attraction in Speyer is Das Technik-Museum. It was opened in 1991 and includes a collection of aircraft – including a Boeing 747 and an Antonov An-22. In addition, you find here 1,44 meter long submarine, several locomotives and a number of other technical devices.