Rental Car Sonderborg
RentaCarBestPrice.com compare prices from a number of car rental companies and find the best price on car rental. All prices on car rentals in Sønderborg include necessary insurance and unlimited mileage.

Are you looking for affordable car hire in Sonderborg? It is very popular to rent a car in Sonderborg, the majority choose to pick up a car at the airport. With car hire in Sonderborg you and your family have the opportunity to take pleasant day trips in the areas surrounding, and you will not be dependent on public transport. By comparing prices of car rental in Sonderborg from several players, you can save a lot of money. If you prefer to retrieve the rental car in the city center, this is also possible. 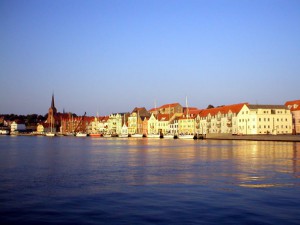 Sønderborg (27,200 inhabitants in 2009) located on both sides of the Als Sund, and is the largest city in southern Jutland. Entire Sønderborg municipality, which administratively belongs to Region of Southern Denmark, has a population of 76,800. The town was founded in 1256 and currently consists of a mixture of old and new buildings.

Sønderborg, with its geographical proximity to Germany, had a troubled history – and in 1864 it was conquered by Preus Fighters. From then until 1920 the city was German, but became so after a referendum on the new incorporated in Denmark.

One of the most visited attractions are Sønderborg Slot, originally a medieval castle, which today ia houses an interesting museum for Sønderjysk history. Among other things the following are mentioned: Retailer Museum Kastaniehuset, Dybbøl Mill and History Center Dybbøl Banke.

The nearest airport is Sønderborg Airport, located approx 7 km north of downtown. Here is the daily routes to Copenhagen, and you can also fly from here (via Copenhagen) to several European destinations.