Rental Car Seinajoki
RentaCarBestPrice.com compare prices from a number of car rental companies and find the best price on car hire. Book with us and get necessary insurance and unlimited mileage included in the price. 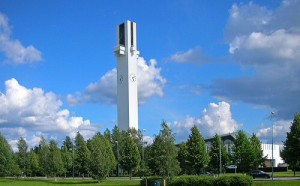 Seinäjoki is located in the western part of southern Finland – specifically the landscape Southern Ostrobothnia, where the town is also administrative center. First in 1960 did Seinäjoki city status, but had already in some 150 years had urban settlements. The population in today’s Seinäjoki is located – for a municipal amalgamation in 2009 – at around 57,000.

The architecture of Seinäjoki is mostly modern, and Finland’s most famous architect – Alvar Aalto (1898-1976) – has left its mark on almost all the city’s public buildings. Aalto’s projects are considered as among the most important sights in the city. This applies to Aalto Center (6 buildings that make Seinäjokis cultural and administrative “heart”), church Lakeuden Risti (1200 seats) – and the city hall, library and theater.

Airport Seinåajoki Airport is located at the village of Ilmajoki, ca. 11 km southeast of the city.