Rental Car San Jose
RentaCarBestPrice.com compare prices from a number of car rental companies and find the best price on car rental. All prices on car hire in San Jose include necessary insurance and unlimited mileage. 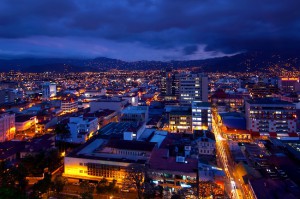 San José is the capital of Costa Rica and has a central location, something closer to the West Coast and the Pacific than the East Coast and the Caribbean Sea. The town lies in the valley Valle Central and it is approximately 50 km to the west coast. San José belongs to the province of the same name and is the largest city in the country. In 2007 there lived about 335 000 inhabitants in San José.

Nature is rich and lush, and the city boasts many parks including Parque Metropolitano La Sabana is the largest. There are dozens of museums in San Jose, including the Children’s Museum Museo de los Niños and the exotic insect museum Museo de Insecto de la Universidad de Costa Rica. One of the most famous buildings is the beautiful National Theatre from 1897. About an hour outside of San José is the active volcano Poás which is a major attraction.