Rental Car Rovaniemi
RentaCarBestPrice.com compare prices from a number of car rental companies and find the best price on car hire. Book with us and get necessary insurance and unlimited mileage included in the price. 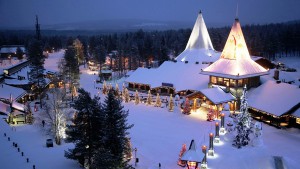 Rovaniemi is the commercial and cultural center of Finland’s northernmost landscape, Lapland. The city, which also houses the University of Lapland, has 59,353 inhabitants (2008). Although Rovaniemi has been a church since the Middle Ages, did not the city trading rights until 1960. It had indeed long been urban settlement on the site, but most buildings were burned by the Germans in 1944.

After the 2nd World War, a new center, located at the confluence of the Kemijoki and Ounasjoki meet, designed by the famous architect Alvar Aalto (1898-1976). He is also responsible for several of the city’s public buildings: City Hall (City Hall), City Library and Lappiahuset (which houses the city’s theater). The most monumental building in Rovaniemi is enough, however, cultural and congress center arcticum, listed in 1992 after drawings by a Danish architect firm.

Also ski Ounasvaara just outside the city is an attraction that draws many tourists here in the winter.

Rovaniemi Airport is a local airport that has a number of charter traffic – as well as regular flights to Helsinki.