Rental Car Potsdam
RentaCarBestPrice.com compare prices from a number of car rental companies and find the best price on car hire. Book with us and get necessary insurance and unlimited mileage included in the price. 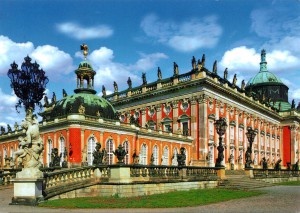 Potsdam, which has approx 132,000 inhabitants (2008), located on the river Havel – 35 km southwest of the German capital Berlin. It is the capital of the state of Brandenburg. There was a settlement here already in the Bronze Age, while the Potsdam city that is known from the year 993.

It characterizes Potsdam are the many castles and parks. Most of them are part of the “Palaces and Parks of Potsdam and Berlin” on UNESCO’s World Heritage List. The most magnificent of the parks is Park Sanssouci. Here there are several beautiful castles. The oldest and most famous is the Schloss Sanssouci (1745-1747), but also the powerful Neues Schloss (1763-69) and Orangerieschloss (1851-64) is here – in addition to the less bright castle Charlottenhof (1826).

The park Neuen Garten is Marmorpalais (1787-1792) and the Russian village Alexandrowka, which was filed first in the 1800s. Another large park, a little on the edge of the central Potsdam, Park Babelsberg, where we both find Babelsberg Palace (also called “Kleines Schloss”) and Film Park Babelsberg, Germany’s answer to Hollywood.

In the historic center, Altstadt, has Potsdam his own Brandenburg Gate, built in 1770 (not to be confused with the one in Berlin) – and here is also the Old Town Hall (Altes Rathaus from 1753 a popular destination.

The international airport Berlin-Tegel Airport is 35 km northeast of Potsdam.