Rental Car Plzen
RentaCarBestPrice.com compare prices from a number of car rental companies and find the best price on car rental. All prices on car rentals in Plzen include necessary insurance and unlimited mileage. 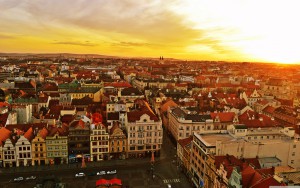 Plzeň is the Czech Republic’s fourth largest city and has a population of almost 165 000 (2007). The city belongs to the region Pilsen and is located far west of the country, in Bohemia. Plzeň, called Pilsen in German, is located at the four rivers Radbuza, Mže, Uhlava and Uslava running together to the river Berounka. It is about 80 km from the German border. Given the numerous woods and rivers that surround Pilsen, recreational possibilities for the citizens and visitors are numerous. Short day trips to outlying historic sites can be also easily made from Pilsen.

Plzeň is known to brew beer Pilsner and this produce has persisted since the beginning of the 1300s. Visitors should pay a visit to the brewery Pilsner Urquell Brewery and Brewery Museum. Plzeň Zoological and Botanical Garden has the second largest area for bears in Europe as well as natural habitat for cats and a botanical garden. In the historical district are many old buildings, including St. Bartholomew’s Cathedral from the 1300s. For children there are attractions such as a doll museum and a ghost museum that is devoted to tales and legends.

In an effort to increase the quality of education, the University of West Bohemia was founded in 1991. Big number of secondary schools, grammar and art schools, in the area. Several international institutions are also located here: Alliance Francaise, the British Library and the Austrian Library. The spiritual tradition of the city was strengthened when the Bishopric was opened in 1993. Performances in the J. K. Tyl Theatre belong among the most valuable traditions of the Pilsen culture.

Pilsen is a center of international cultural events and festivals that include the Theatre Festival, International Drawing Biennial, Skupa’s Plzen, the International Big-Band Festival and the Smetana Days. The Pilsen Cultural Summer offers various open-air concerts in the city center.

The nearest international airport is Prague Ruzyne Airport which is approximately 90 km away.