Rental Car Paphos
RentaCarBestPrice.com compare prices from a number of car rental companies and find the best price on car rental. All prices on car rentals in Paphos include necessary insurance and unlimited mileage. 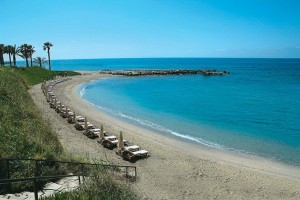 Paphos lies on the southwest coast of Cyprus. 50,000 residents live in the town that lies between the coast and the Troodos Mountains.

The town of Paphos is known for being the birthplace of the Greek goddess of love Aphrodite. Modern Paphos is divided in two, with the top part as a commercial center and the bottom, Kato Paphos with archaeological and hotels. Tombs of kings, from 400-number is a graveyard. Paphos Archaeological Park includes everything from house to Dionysos and Theseus, large Roman villas with mosaic. Among the attractions are also Paphos fort, which was built for the Turks in 1586, a zoo and water park. Visitors can also take a trip to the deep caves and sandy beaches of the Akamas peninsula. Paphos has everything from quiet café life to a vibrant nightlife.

Paphos airport is just outside the center of Paphos.