Rental Car Nuremberg
RentaCarBestPrice.com compare prices from a number of car rental companies and find the best price on car hire. Book with us and get necessary insurance and unlimited mileage included in the price. 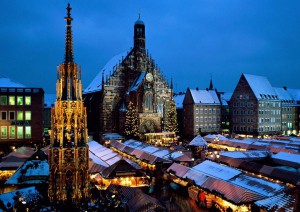 Nuremberg is located in the southern part of Germany – in the region Mittelfranken, which is part of Bavaria. The town was founded already in the 1000s – and currently has in excess of 500,000 inhabitants (2008).

Most probably associate Nuremberg primarily with the so-called “Nuremberg Trials” – ie, the legal settlement with the surviving leaders of the German Nazi regime after World War 2. That this settlement was held right here, was due to Hitler during the war had made Nuremberg to an important administrative center.

Although the town was severely bombarded by the Americans in the final stages of World War 2, there are several notable historic attractions in Nuremberg. Among these we find the great medieval fortress Nürnberger Burg and the old hospital Heilig-Geist-Spital (which has its origins in the 1300s). Several churches have to be counted to the sights – including the Gothic St. Lorenz-Kirche from the late 1200s.

Nuremberg also has a famous zoo – Tiergarten Nuremberg. It was established in 1912, but we know that already in the Middle Ages was a zoo here.

The international airport Nuremberg Airport is located 5 km north of the center.