Rental Car Nessebar
RentaCarBestPrice.com compare prices from a number of car rental companies and find the best price on car rental. All prices on car hire in Nessebar include necessary insurance and unlimited mileage. 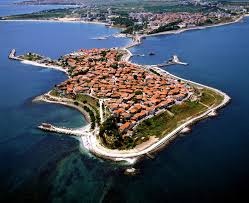 Nesebar is a popular holiday resort located on the east coast of Bulgaria. The oldest part of Nesebar is situated on a peninsula in the Black Sea, while the newer district has emerged on the mainland. The peninsula is connected to the mainland via is isthmus is a narrow promontory, almost like a mole. It is not clear whether the isthmus is natural or man-made. The city lives mostly on tourism and its population is approximately 9800 (2007).

Nesebar is one of the oldest cities in Europe and is characterized by several millennia of settlements. Town on the mainland is known as a vacation paradise with beaches at 4 km, but the old town on the peninsula, attracts tourists who are interested in history and culture. Many of the buildings here originate from the Middle Ages between 1000 and 1300, and most are churches. The historic buildings were listed on the UNESCO World Heritage list in 1983.

The nearest airport is Bourgas International Airport which is about 30 minutes away from Nessebar.