Rental Car Munich
RentaCarBestPrice.com compare prices from a number of car rental companies and find the best price on car hire. Book with us and get necessary insurance and unlimited mileage included in the price.

By comparing prices of car rental from several companies, it will be easier to find extra good car deals. Arriving to the international airport in Munich, it will be most convenient to retrieve your car rental here. It is also possible to retrieve the rental car in the city center, if this is more desirable. 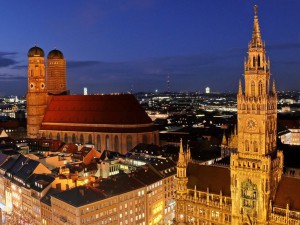 Munich is located in the southeast of Germany, near the river Isar, and is the capital of the state of Bavaria. The city has 1.3 million inhabitants (2008), and is the 3rd largest city in the country after Berlin and Hamburg.

Munich was founded in 1158 and is today an important commercial center and transport hub. In addition, the city has the country’s largest university, and is known for its scientific and technical museums. “Deutsches Museum” is Europe’s largest technical museum with interactive exhibits for the whole family.

Munich is experiencing a major tourist influx, and the old town with its medieval buildings is one of the most popular sights. Here one can see “Alter Hof” – a former royal residence from 1253, City Hall in neo-Gothic style from 1867 to 1908 (with its famous chimes), and “Frauenkirche” from 1271 – with its two towers of 99 meters, where one is open to the public.

Munich also has several baroque and rococo buildings from the 1600s and 1700s – including Theatinerkirche, prince castle Residenz and the beautiful summer palace Nymphenburg from 1674.

The city has a number of theaters, opera houses, museums and art galleries. The old-, the new- and Modern Glyptothek are the three most famous art museums – an exhibition from various eras.

Other sights in Munich’s Theater Museum, “Englischer Garten” (one of the largest parks in the world – established at the end of the 1700s), BMW Museum, zoologisk- and Botanic Garden and Olympia Tower – a 291-meter high TV tower, built in 1968. Visitors can get up the tower, where there is a viewing platform 171 meters above ground, and a revolving restaurant.

RentaCarBestPrice.com offer cheap car hire at several locations in the center of Munich and at Munich Airport. Use our user friendly search engine and access to cheap rates and rental cars within a few seconds. After booking you will quickly receive a confirmation of your order and which rental provider to contact with.

The city’s international airport – Munich Airport (MUC) – located 29 km northeast of the center, and is also called Franz Josef Strauss Airport. A number of car rental companies have their offices at the arrival hall at the airport – including Avis, Hertz, Enterprise, Europcar, Sixt and Rent a Terstappen.

Munich is a transport hub, and 6 motorways pass the city. The state has good roads and adequate signage. In addition to highways are small romantic country roads in the picturesque surroundings.

If you going to Munich city center, you should be prepared for relatively heavy traffic and congestion – especially during rush hour. It can also be a challenge to find free street parking in the city, but the city has large park along the highway just outside the center. From here you can take bus to different destinations. There are also several multi-storey car parks in Munich city center, and a number of hotels offering guest.

With car hire in Munich you have the possibility to take pleasant excursions and see more of the state. It is also popular to drive to Salzsburg in Austria, located 144 km southeast of Munich. The famous composer Mozart was born in Salzburg, and here one can visit his home, which is converted into a museum. Also fortress “Hohensalzburg” from 1077 is a major tourist attraction. The fortress is situated on a hill above the city, and receives approximately 1 million visitors annually.

Another tip with rental car is to take a day trip to Rothenburg ob der Tauber, which is one of Europe’s best preserved cities of the Middle Ages. The town is located 248 km northwest of Munich – right by the A7 motorway.

Part of the old city was destroyed during World War 2, but has been rebuilt.

Rothenburg ob der Tauber has about 11,000 inhabitants and is a romantic city with city walls from the 1200s, narrow streets and alleys and beautiful timbered houses. In the square one can see the Town Hall with its 52 meter high tower – where visitors have access. From the top of the tower one gets a breathtaking panoramic view of the city and region. Another popular attraction just near St. Jacob’s Church from the 1400s. Old Town is a UNESCO World Heritage Site.

The famous Neuschwanstein Castle is also a very popular destination with a rental car in Munich. The castle is located in scenic surroundings 126 km southwest of Munich, and was begun in 1868. Neuschwanstein is reminiscent of a fairytale castle with its beautiful spiers and turrets, and receives 1.4 million visitors annually.