Rental Car Montpellier
RentaCarBestPrice.com compare prices from a number of car rental companies and find the best price on car hire. Book with us and get necessary insurance and unlimited mileage included in the price. 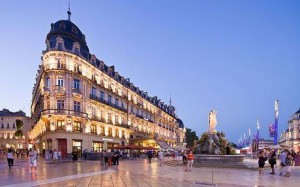 Montpellier in French and officially Montpelhièr Occitan is a city in southern France, capital of the Languedoc-Roussillon and Hérault department. It is crossed by two rivers: the east Lez and the Mosson west. According to data from 2009 had a population of 287,392 inhabitants, if the metropolitan area is included numbered 1,516,360 inhabitants (2008) inhabitants.

Montpellier is located in just 10 km from the Mediterranean coast.

Montpellier was founded in the year 985. And today is characterized both by historical buildings from the Middle Ages and more modern architecture.

The historic center – “Ecusson” – with its quaint narrow streets and small shops are worth a visit, and Cathedral of Saint Pierre 1500s.

“Place de la Comédie” is the city’s largest and most central place, and this is also the “Opéra Comédie” – the city’s Opera House from 1888.

A major tourist attraction in Montpellier’s Musée Fabre – one of the largest art museums in the country – with 800 exhibited paintings made by European artists in the period from 1500s to 1700s. The museum also has an exhibition of sculptures and pottery objects.

The city has its own airport – Aéroport Montpellier Méditerranée – located 7 km southeast of downtown.

In 2007 was the eighth city in France for its intra-muros, population is one of the few among cities with over 100,000 inhabitants, whose population has increased continuously for fifty years, a period that has doubled its population. Since 2006 until today Montpellier win 12 000 inhabitants per year.

Montpellier is a very young city compared with other major cities in the region such as Nimes, Narbonne, Beziers or Carcassonne which were created mostly in Roman times. Montpellier was founded in the eighth century. During the Middle Ages, the neighboring city of Magalona was the main city in the area, but the frequent pirate attacks favored a more interior settlement. Until the tenth century did not acquire some importance when it became a commercial center for the counts of Toulouse. Between 975 and 1349 it was the capital of the lordship of Montpellier, first under the dynasty of the Guillermos (Occitan Guilhem), and later the Crown of Aragon.

Faculty of Medicine of Montpellier, with the cathedral in background.
Montpellier became part of the Crown of Aragon after the wedding of Pedro II of Aragon and Mary of Montpellier in 1204, whose son, James, was born in the city in 1208 after the death of James I, the Lordship of Montpellier became part of the Kingdom of Mallorca, until in 1349, Jaime III of Mallorca sold it along with his other possessions in Occitania French king Philip VI fundraiser in his war against Pedro IV of Aragon, at which time it became definitively the French crown. Jewish doctors created the Medical School in the early thirteenth century. The University was established on 26 October 1289 the seat of the Bishop of Maguelone was moved in 1536 to Montpellier.

During the time of the Protestant Reformation, many of its inhabitants were Huguenots, the name was known in France Calvinists. The city was a stronghold of Protestant resistance to the French crown, Catholic tendency. In 1622, King Louis XIII of France took the city after a siege of twenty months.

During the nineteenth century, the city developed industrially becoming an important center in the region.

In this regional capital call interview Montpellier, between General Francisco Franco and Philippe Pétain, head of Vichy France, was held the first was passing through the city as it was included in the return route of the train after Bordighera interview with Mussolini.

The city was bombed several times during the Second World War.