Rental Car London
RentaCarBestPrice.com compare prices from a number of car rental companies and find the best price on car hire. Book with us and get necessary insurance and unlimited mileage included in the price. 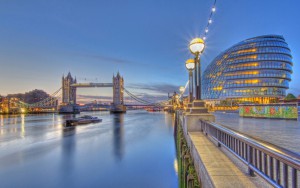 London is the capital of the United Kingdom and is located south of the country. Thames divides the city and flows into the English Channel 65 km further south. The city is divided into 32 districts and the oldest district City of London who just called City. London has been around for about 2,000 years and served as trading is already around the year 60 AD.. Today the population of ca. 7,500,000 (2008).

London has a lot to offer, both historic buildings, famous parks and world-renowned theater Westend. Visitors can pick and choose among all kinds of museums, from the Museum of London to Madame Tussauds. Known buildings are the clock tower Big Ben and the world-famous Castle Tower of London, where the crown jewels are located. Other attractions that should be taken a visit Buckingham Palace, London Zoo and Sea Life London Aquarium.

The road network in the UK is well laid out and has great highways. As most know, the UK has left driving and the steering wheel is on the right side. Although most adapts left driving fast, it is important to be extra careful at intersections and roundabouts. Seems one it seems unaccustomed to shift with your left hand, it is advisable to book a rental car with automatic transmission.

Remember that speed limits in England are miles per hour – instead of km / h. In urban areas the speed limit is 30 mph – which corresponded to 48 km / h.

In central London can be chaotic to drive, and in some zones have been introduced congestion charge (“Congestion Charge”). This fee applies to all weekdays in the period from 07.00 to 18.30 – and costs GBP 8. The areas are marked with signs showing a white C on a red background. The tax is paid by mobile, online or at gas stations.

With car hire in London at the summer time is popular to take a day trip to the fashionable seaside town of Brighton – located 103 km south of hrovedstaden. The drive takes about 2 hours and here one has great swimming with sandy beaches. The place is also popular for windsurfing, sailing and beach volleyball. A major tourist attraction in town is The Royal Pavilion Brighton from the 1700s, which previously belonged to the British royal house. Today the pavilion open to the public. Brighton Pier is also one of the city’s attractions, and is an amusement place with ia restaurants, rides and arcades.

Another tip for the excursion with car hire in London, is to drive to one of England’s most famous landmarks – Stonehenge. The place is located 136 km southwest of the capital, and this prehistoric monument consists of a circular megalithic stone setting – surrounded by a ring tomb. Stonehenge is a UNESCO World Heritage Site, and parts of stone setting is over 3,000 years.

London Stansted Airport (STN) is located 62 km north of London, and operated primarily by budget airlines like Ryanair and EasyJet. In the terminal building at the airport you will find several well-known international car hire operators available – including Avis, Sixt, Budget, Enterprise and Alamo.

London City Airport (LCY) also offers international flights and is located just 14 kilometers east of downtown. If you wish to retrieve your car rental here, are dropped to Avis, Hertz, Alamo, National and Budget just next to the terminal building.