Rental Car London Stansted Airport
RentaCarBestPrice.com compare prices from a number of car rental companies and find the best price on car hire. Book with us and get necessary insurance and unlimited mileage included in the price. 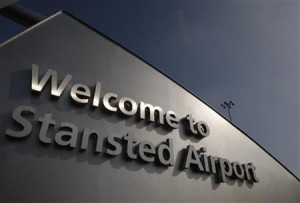 London Stansted Airport (STN) is located approximately 50 kilometers north-east of London. It is the third busiest airport in the UK and one of London’s five international airports. The easiest way to get in to and from London is by train which runs every 15 minutes from the airport and takes 45 minutes. Five different companies offering car rental.

In 2008, the airport handled 22,360,364 passengers. London Stansted is mainly used by low cost airlines such as Ryanair and easyJet, and also serves as the main base for these companies. From Stansted can fly to 160 different destinations in Europe and North Africa.

The airport has a wide selection of shops, restaurants and cafes. There are two hotels at the airport. A shuttle bus runs from London Stansted to Hilton London Stansted. The new Radisson SAS hotel is located two minutes from the terminal and can be accessed via a walkway with a roof. United Business Centre located close to the airport with meeting rooms and offices.

The road network in the UK is well laid out and has great highways. Britain has left driving and the steering wheel is on the right side. Although most adapts left driving fast, it is important to be extra careful at intersections and roundabouts. Seems one it seems unaccustomed to shift with your left hand, it is advisable to book a rental car with automatic transmission.

In central London can be chaotic to drive, and in some zones have been introduced congestion charge (“Congestion Charge”). This fee applies to all weekdays in the period from 07.00 to 18.30 – and costs GBP 8. The areas are marked with signs showing a white C on a red background. The tax is paid by mobile, online or at gas stations.

To get to London from the airport fastest way, choose highway M-11. Britain’s capital London has about 8 million inhabitants, and is one of the most important political, economic and cultural centers. In London you will find a wealth of sights and attractions – in addition to great shopping and a bustling nightlife. Some of the most famous landmarks in London among others Big Ben, House of Parliament, the British Museum and the Royal Castle Buckingham Palace – the residence of the English royal family. St. Paul’s Cathedral from 1710 has high visitor numbers and the Tate Modern, which is a National Gallery of Modern Art.

If you want great views over London, visitors can head up in the world’s largest Ferris wheel – London Eye. The city is also famous for its theaters, opera houses and concert halls. The most famous concert hall’s Royal Albert Hall, which was inaugurated in 1871.

Another driving tips are university city of Cambridge, which is 50 km north of London Stanstead Airport. Cambridge is located on the River Cam, and has approximately 123,000 inhabitants. The city is one of England’s oldest and received city status already in 1207. Cambridge has many beautiful buildings. Particularly known is Cambridge University, which was inaugurated in 1209 and the Gothic chapel of King’s College Chapel from the 1400s.

Cambridge also has several museums – including Fine Arts “Kettle’s Yard”, archaeological and anthropological museum and military museum “Imperal War Museum” – located in Duxford 20 km south of Cambridge and can be reached via a walkway with a roof. United Business Centre located close to the airport with meeting rooms and offices.