Rental Car Liege
RentaCarBestPrice.com compare prices from a number of car rental companies and find the best price on car rental. All prices on car hire in Liege include necessary insurance and unlimited mileage. 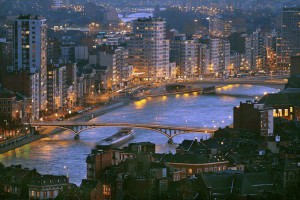 Liège is the capital of the province with the same name in Belgium and the population within city limits was in 2008 estimated at over 180 000. If you include the suburbs, the figure rises to over 585 000. Liege is located at the confluence of the rivers Meuse, Ourthe and Vesdre. The city’s harbor is one of the largest inland ports of Western Europe with its 40 km which extends along the Meuse.

Liège is a mixture of modern and historical. The town has existed for over 1,000 years and consequently it remains several historic buildings. It is especially churches that have stood the longest, and in the oldest part of town, one can visit St. Paul’s Cathedral from the 1200s and St. Denis Church from 900’s. Montagne de Bueren is a famous staircase of Liège with the entire 406 steps, and on top there is a fantastic view.

Liege Airport is also called Liège-Bierset and located 9 km northwest of the city. The airport is the third largest in Belgium after Brussels International Airport and Brussels South Charleroi Airport.