Rental Car Liberec
RentaCarBestPrice.com compare prices from a number of car rental companies and find the best price on car rental. All prices on car hire in Liberec include necessary insurance and unlimited mileage. 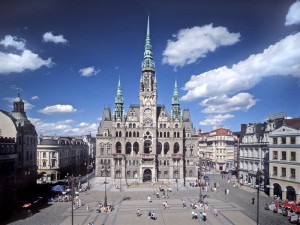 Liberec is located almost entirely north of the central Czech Republic and in the region of Bohemia. Nisa river runs through the town and it is just over 20 km to the German and Polish border which is just north of Liberec. With a population of almost 100,000 (2008), Liberec is the sixth largest city in the Czech Republic.

Liberec is a historic town and there are several old buildings to see in the city, including City Hall from the 1800s and the castle Count Clam Gallas from the 1600s. The town lies at the foot of the mountain peak Jested, and TV tower by the same name was built in 1968 and is a famous landmark. One of the most visited attractions are the zoo opened in 1919 and is thus the oldest zoo in the former Czechoslovakia. Here there are exotic animals such as elephants and giraffes, but it is the rare breed white tigers are the most popular.

Prague Ruzyně Airport is the closest airport and is approx 130 km south of Liberec.