Rental Car Larnaca
RentaCarBestPrice.com compare prices from a number of car rental companies and find the best price on car rental. All prices on car hire in Larnaca include necessary insurance and unlimited mileage. 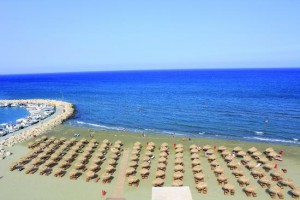 Its history goes 6000 years back in time, and can be Cyprus’s oldest city. According to a legend was Larnaca founded already ca.1200 BC and then called Kition. Larnaca has several historical buildings and ruins. Lazarus should have come to Larnaca after being awakened from the dead by Jesus. He has a church named after him: Lazarus Church is from 900s. This is also an Ottoman fort from the 1600s and several Roman ruins. By the lake is Hala Sultan Mosque where Mohammed’s foster mother should be buried. Stoics Zenora came from Larnaca. Larnaca has a beautiful beach promenade with palm trees and several restaurants. Visitors are lucky, they may see pink flamingos in Larnaca. The city has a lively nightlife with several discos, bars and pubs.

Larnaca airport is located six kilometers west of the city.