Rental Car La Rochelle
RentaCarBestPrice.com compare prices from a number of car rental companies and find the best price on car hire. Book with us and get necessary insurance and unlimited mileage included in the price. 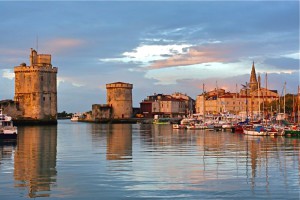 La Rochelle is a city in western France in Poitou-Charente district. The city is the capital of the Ministry of Charente-Maritime. La Rochelle is situated on a bay in Ile de Ré in the Bay of Biscay, north of Bordeaux and south of Nantes. About 77,000 residents live in the city center, 117,000 with the suburbs. La Rochelle is one of France’s most important fishing ports.

La Rochelle was founded in the 1100s, and was a contentious point of support for the Huguenots during the Wars of Religion. The city is famous by Alexandre Dumas’ The Three Musketeers in 1844, where part of the action is added to La Rochelle. The city became a German submarine base during World War II, but the city’s old town is well preserved. It is inter alia a Renaissance town hall from the 1500s, the three towers tour de la chaine, tour St. Nicholas and Tour de la Lanterne which dates back to medieval times. This is also a beautiful cathedral and a huge aquarium. The city also hosts several festivals, including a film festival and jazz festival in the summer.

Airport La Rochelle is about eight kilometers outside the city center.