Rental Car Helsinki
RentaCarBestPrice.com compare prices from a number of car rental companies and find the best price on car hire. Book with us and get necessary insurance and unlimited mileage included in the price. 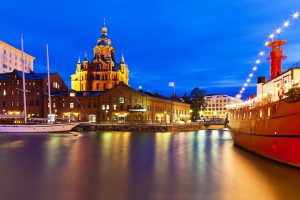 Helsinki, Finland’s capital, is a major port city on the Gulf of Finland – in Southern Finland Province. Its population in the city is 583,484 (2009) – while throughout the capital region lives about 1 million people.

Helsinki was founded by the Swedish King Gustav Vasa in 1550, and the city was then a little further to the northeast – but about 100 years later city moved to its present location. The city was for centuries under Swedish – then a shorter period under Russian – control. Since 1917 has been the capital Helsinki in the independent Finland.

Large parts of Helsinki’s architecture is characterized by Classicism and Art Nouveau style, but the city can also show off several monumental buildings in the Bauhaus style. Several of these are signed by Finland’s own world famous architect Alvar Aalto (1898-1976). His most famous building is the concert and congress hall – Finlandia (1971).

Among Helsinki’s remaining interest must be mentioned Contemporary Art Kiasma, the Orthodox Uspenski Cathedral and Suomenlinna fortress – which includes several islands in the archipelago at the entrance to town. It is considered one of the world’s largest, preserved fort – and it’s UNESCO World Heritage Site.

There is no toll on highways in Finland. The blood alcohol limit is 0.5.

From Helsinki there are motorway connections to numerous other cities in Finland, so that one can easily and quickly visit other destinations.

It can sometimes be difficult to find parking space in downtown Helsinki, and parking garages often have high fee. Several downtown hotels offer however its guests parking.

With car hire in Helsinki can take a day trips in the area outside the capital, – entirely at your own pace.

A driving tips include Nuuksio National Park, located 37 km northwest of Helsinki. The national park was founded in 1994 and consists of a beautiful natural landscape of forests, mountains, valleys and numerous lakes.

There are visitor center at the main entrance to the national park, and one can choose from different trails.

If you are interested in classical music, one should take a drive to the house “Ainola”, located 40 km north of Helsinki. Finland’s most famous composer Jean Sibelius lived and worked here, and today is his home turned into a museum. Ainola Sibelius Museum is located 2.5 km south of the town of Järvenpää (Finnish: Järvenpää).

The port city of Turku is also a great tourist destination, and called on Finnish Turku. Turku is located 169 km west of Helsinki, and is Finland’s 5th largest city with 183,000 inhabitants (2014).

Turku, founded in the 1200s, and is Finland’s oldest city. Here you can visit Turku Castle – which was also listed on the 1280 figure and the Cathedral, which was inaugurated in the 1300s. Other sights in the city is Luostarinmäki open air museum and the museum “Aboa Vetus & Ars Nova” – which has exhibits on the history, archeology and contemporary art.
Turku was named European City of Culture in 2011 (along with the city of Tallinn in Estonia).

Between Terminals 1 and 2 you find a variety car rental companies – including Avis, Budget, Europcar, Hertz and Sixt.