Rental Car Graz
RentaCarBestPrice.com compare prices from a number of car rental companies and find the best price on car rental. All prices on car hire in Graz include necessary insurance and unlimited mileage. 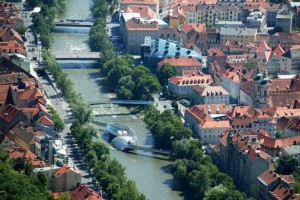 Graz is Austria’s second largest city with 250,000 inhabitants (2009) and is the state capital of Styria. Graz is located south of Austria, on the borders with Hungary and Slovenia. This is an ancient city that was mentioned in sources in 1115, but it is estimated that the city’s elderly. The city lies on both sides of the river Mur.

Because of its long history, many old buildings to visit in Graz. The town is centered around the mountain crag Schlossberg, and on top of this is a castle ruin and a beautiful clock tower from the 1500s which is surrounded by a flourishing green area. There are many medieval churches that are preserved in the city, including a Gothic cathedral from the 1400s. Center and old town of Graz in 1999 was put on UNESCO’s World Heritage list.

9 km outside the city is Graz Airport has two terminals and nearby hotels. The airport offers both international flights and domestic flights.