Rental Car Essen
RentaCarBestPrice.com compare prices from a number of car rental companies and find the best price on car hire. Book with us and get necessary insurance and unlimited mileage included in the price. 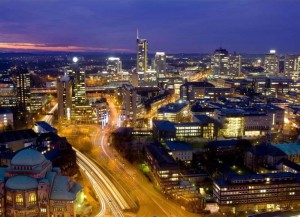 Essen is the largest city in the Ruhr industrial area in North Rhine-Westphalia. It has 586,000 inhabitants, making it the eighth largest city in all of Germany. It was founded already in the year 845 AD – And is designated as European Capital of Culture in 2010.

There is hardly any preserved historic buildings in Essen, which is because the city was virtually wiped out during World War 2. A landmark of contemporary art in Essen’s city hall, which is Germany’s highest – a skyscraper that towers 120 meters above street level.

However, there are a few pre-war city sights, including the monumental estate Villa Hügel slightly off center, built in 1873 as the private residence of the famous industrial family Krupp. Today it houses an art museum estate. Also district Margarethenhöhe (named after Margarethe Krupp) must be mentioned. It was built in priod 1909-1920 by architect Georg Metzendorf – and is, because of its many green areas, often called the “Garden City”. Another special feature of the town is that no building facades are alike.

Obviously industrial city Essen also cultural remains of its business history. Zeche Zollverein is a shut down – but the museum purposes restored mining facility, which today is a UNESCO World Heritage Site.

Airport Essen / Mülheim is about 8 km southwest of downtown.