Rental Car Eisenach
RentaCarBestPrice.com compare prices from a number of car rental companies and find the best price on car hire. Book with us and get necessary insurance and unlimited mileage included in the price. 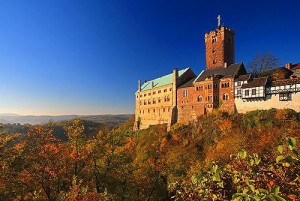 Eisenach, which has ca. 44,000 inhabitants, situated in the middle of Germany – in the state of Thuringia. The city has grown around the castle Wartburg, who according to tradition was founded in the year 1067 – and still is Eisenach’s main attraction.

Eisenach is otherwise related to two of German and European history’s most famous personalities: Martin Luther (who had parts of their childhood here) and Johann Sebastian Bach (who was born here). Both have received museums in the city named after him. Luther Haus is a half-timbered house from the 1400s, where the famous reformer lived for several years while attending school – while Bach Haus is a 600 year old building located right near the composer’s childhood home.

It must also be noted that there are a number of architectural sights in Eisenach – including the Old Town Hall from 1596 and Kreuznacher Haus (1539). Moreover, the city has a magnificent botanical garden – Kartausgarten – which originally was built as a monastery garden in the 1300s.