Rental Car Dusseldorf
RentaCarBestPrice.com compare prices from a number of car rental companies and find the best price on car hire. Book with us and get necessary insurance and unlimited mileage included in the price. 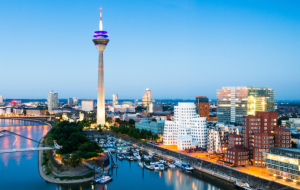 Dusseldorf is located northwest of Germany, on the river Rhine, is the state capital of Nordhrein-Westphalia. The city has nearly 600,000 inhabitants, and is also geographically linked to the huge industrial Ruhr area.

Beside that is a major business center in this part of Germany, the Duesseldorf also known as an important city of art – and there are a number of interesting galleries and art museums here. Art Academy in Dusseldorf was founded in 1762 and had its heyday in the 1830s and 1840s as the hotbed of the so-called “Düsseldorfer School” in European painting.

Among the biggest attractions else do we rococo castle Benrath (built between 1755 and 1770), which is slightly off center. Mention must also be the historic district Kaiserswerth, located in northern central area – on the banks of the Rhine – and who among others includes the ruins of the Holy Roman Emperor Friederich Barbarossa medieval fortress (the 1100s) and a number of old baroque buildings.

The old central district of Altstadt is also a popular destination. Beside being able to present some interesting, old architecture (including several churches), this section of Düsseldorf also offers a lively nightlife. Altstadt is often called “the longest bar counter” because of the more than 300 bars and beer halls that lie close together here. Also shopping possibilities are good, especially in the famous shopping street Königsallee (often shortened to Kö).

The large airport, Düsseldorf International Airport, which is one of Germany’s busiest airports, located 9 km north of downtown.