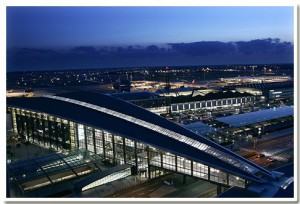 Copenhagen Kastrup Airport (CPH) is the largest air garden in the Nordic region and the 17th largest in Europe. It is located eight kilometers south of Copenhagen and 24 km from Malmo in Sweden on the other side of the Øresund Bridge. The easiest way to get to central Copenhagen is by metro from the terminal three. There are also regular buses. Eight different car rental companies, most of them in terminal three.

19,715,451 passengers visited the airport in 2009. Kastrup consists of three terminals. The latest, Terminal 3 was built completed in 1999 and is the primary terminal to the SAS. Kastrup is one of three main bases for the SAS, as well as for Norwegian Air Shuttle, Cimber Sterling and Transvia.com. From Kastrup, a plane to 130 international destinations.

The airport has a very good range of shops, particularly in the fashion stores as well as accessories. There are over 20 different cafes and eateries. The newly built Hilton Cophenhagen Airport Hotel is directly connected to terminal three with a covered again.