Rental Car Cologne
RentaCarBestPrice.com compare prices from a number of car rental companies and find the best price on car hire. Book with us and get necessary insurance and unlimited mileage included in the price. 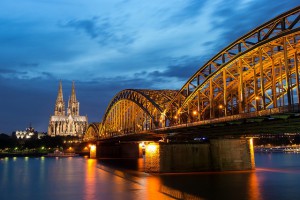 Cologne is located in western part of Germany, by the river Rhine and is the largest city in the state of North Rhine-Westphalia. The city has approximately 1 million inhabitants (2008) – and it is estimated suburbs, the population is increasing to 1.8 million.

Cologne has one of Germany’s most important inland ports, and is also the economic, cultural and historical center of the Rhineland.

One of the most visited tourist attractions located in the town – Cologne Cathedral – which was started in 1248 and was completed in 1880. Cologne Cathedral is the largest Gothic church in Northern Europe and is 157 meters high. The building is listed as a UNESCO World Heritage Site.

Cologne has over 30 museums, including The Roman-Germanic Museum with its archaeological heritage, depicting the city’s role as a major trading port in the Roman Empire.

Other famous museums and tourist attractions in Cologne is the 148 meter high skyscraper “KölnTurm”, Gross St. Martin church from the 1200s, the City Hall from 1569 in Renaissance style, the Museum Ludwig (art museum with an exhibition of contemporary art and pop art), The Cultural History Museum, Photography Museum, City Museum – and Wallraf-Richartz Museum, an art museum with exhibits of paintings, sculptures and graphics from the Middle Ages until today.