Rental Car Colmar
RentaCarBestPrice.com compare prices from a number of car rental companies and find the best price on car hire. Book with us and get necessary insurance and unlimited mileage included in the price. 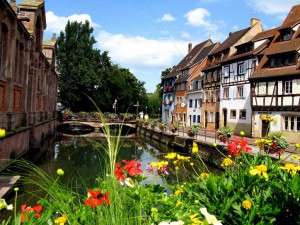 Colmar is a city in eastern France, in Alsace. Colmar is the capital of the Ministry of Haut-Rhin, and is located 15 kilometers west of the Rhine. About 67,000 residents live in Colmar.

Colmar was founded in the 800s. In 1226 received town status as a free Imperial Town in the Holy Roman Empire. When the city was part of Germany called the city Kolmar. It came in French hands in 1697, but became a German in 1871, and French since 1945. Colmar has many well-preserved buildings from the Middle Ages and Renaissance. Here is the famous Isenheim altar from the 1500s by Matthias Grünewald, considered a masterpiece of sculpture genre. The city has several older buildings that St. Martins church from the 1200s and the Dominican convent Unterlinden same period. Here lies Unterlinden museum today. The city also ethnographic, toy museum and Bartholdi museum, the designer of the Statue of Liberty in New York. Here are also contemporary art museum Espace Andre Malraux.

The nearest airport is Basel or Strasbourg, both about 60 km from Colmar.