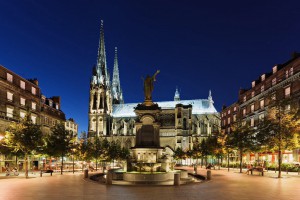 Rock Capital, its location between a curtain of volcanoes is exceptional. The particularity of Clermont-Ferrand is to be born of the union of two cities in the seventeenth century, whose historic centers surprise visitors. Its uniqueness comes from the use of volcanic stone monuments, which gives amazing strength to the city.

Volcanic in nature, volcanic by culture, Clermont-Ferrand invited to share a multitude of environments, through its streets and its rich cultural season.

Things to do in Clermont-Ferrand:

The two historical towns of Clermont and Montferrand.

Basilica of Notre-Dame-du-Port (Our Lady of Puerto) declared a World Heritage Site by UNESCO.

The Gothic Cathedral built in stone of Volvic Volcanic charcoal gray. It houses a brilliant collection of stained glass and murals.

The Michelin Adventure: in an old renovated workshop, epopea of the multinational, with headquarters Clermont-Ferrand, discover content and 9 slots of different styles.

Square Jaude: flanked by monuments, statues and department stores. Ideal for all types of purchases appointment.

The Puy de Dôme, declared “Grand Site de France”. From June 2012 a scenic train will allow access to the top in any season.
Vulcania, the European Park of Volcanism, located only 15 km from the city, offers unique emotions in a spectacular natural setting of Auvergne Volcanoes.

The collections of the 3 museums. In the MARQ (Museo de Arte Roger-Quilliot), Fine Art collections in an old Ursuline Convent of the seventeenth and eighteenth centuries: do not forget to visit the gallery of the nineteenth century (Gustave Doré, Chassériau, Bartholdi, Camille Claudel). The Henri-Lecoq Machinery Museum has two arithmetic invented by Blaise Pascal, who was born in 1623 in Clermont Collection of archeology at the museum Bargoin: Sources plates possesses unique des Roches in Europe.

Climb the 250 steps of the tower of the cathedral Bayette for a view of the city that left speechless.

Scratching his belly to the sun in the Montjuzet park and have a picnic on the grass with Clermont as decorated background
Living one week a frantic pace of the film festival and go out every night at Electric Palace: cosmopolitan atmosphere guaranteed.

Up early on Sunday to look for bargains in the flea market of Salins.

Go to Saint-Nectaire test your market or Saint-Pierre Saint-Joseph in the market: the tradition before choosing.

Take up traveling to the summit of Puy de Dôme scenic train and discover a magnificent view over 80 dormant volcanoes.

Lost in the pedestrian streets of the antique dealers and booksellers.

Just order a coffee on a terrace on Place de Jaude, looking up at the statue of Vercingetorix.

Becoming a follower of rugby ASM for a day? It is advisable to wear the yellow and blue shirt in the stadium and in the bars peak hours.

Gobble one truffade in a small restaurant serving regional specialties.

Mix in the student life in the Lecoq garden where you chat between classes, tablet in hand on the water.

Taking the pulse of contemporary art in Tôlerie, at FRAC, at the center of the photograph or in museums.

Festivals and events in Clermont-Ferrand