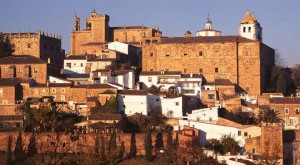 Cáceres is the provincial capital of Cáceres in Extremadura in Spain. The city has about 90,000 inhabitants and the municipality has an area of ​​1,750.33 km ², the largest in the whole of Spain. There have been settlements near Cáceres since prehistoric times. A have found traces of it in the caves of Maltravieso and El Conejar. The city was founded by the Romans in 25 f.Kr.