Rental Car Bordeaux
RentaCarBestPrice.com compare prices from a number of car rental companies and find the best price on car hire. Book with us and get necessary insurance and unlimited mileage included in the price. 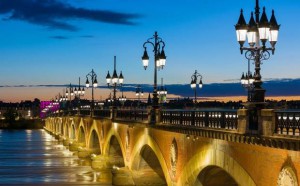 Bordeaux is a port city in southwestern France, capital of the Aquitaine region and the prefecture of the Gironde department. With a population of 239 157 inhabitants in the city and 719,489 in the Communauté urbaine de Bordeaux, is the fifth largest city in France, after Paris, Marseille, Lyon and Toulouse. Its metropolitan area, called air urbaine de Bordeaux has 1,114,857 inhabitants in a Bordeaux-Arcachon-Libourne conurbation.

Its history stretches back to around 300 BC, and up to the middle ages was successively under the Celtic (Gallic), Roman, Frankish and Arab rule. In the 800s, the city was conquered by the Vikings – and in the period from 1154 to 1453 it was the British who ruled there.

Bordeaux is best known for its excellent wines, but the city has otherwise a number of attractions to offer. Among these, Cathédrale Saint-André from 1096 and Grand Théatre 1780 among the foremost. Mention must also art museums Musée des Beaux-Arts and the Musée d’Art Contemporaire. And obviously have wine town also has its own wine museum – Vinorama.

Bordeaux is often called the “Pearl of Aquitaine”, but still trailing the nickname “Sleeping Beauty”, in reference to its historical center and monuments that were previously not sufficiently highlighted. However, Bordeaux is “awakened” for several years, and in June 2007, part of the city, Port of the Moon, has been registered as a World Heritage Site by UNESCO for exceptional urban complex it represents. However, deserves its nickname because its urban area is one of the most attractive in France, an increase of about 200 000 people in nine years (1999-2008).

The city is famous worldwide for its vineyards, especially since the eighteenth century was a golden age. Former capital of Guyenne, Gascony is part of Bordeaux and is situated on the edge of the Landes of Gascogne.