Rental Car Bernburg
RentaCarBestPrice.com compare prices from a number of car rental companies and find the best price on car hire. Book with us and get necessary insurance and unlimited mileage included in the price. 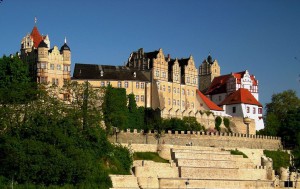 Bernburg, located near the river Saale, the administrative center of the region Salzkreis in the central German state of Saxony-Anhalt. The city has approximately 32,000 inhabitants.

Bernburg was negatively known by 2 World War II, when it was announced that the city had been the scene of a bestial and planned mass murder of handicapped and mentally ill people. A so-called “euthanasia-institute” had been functioning on the city’s psychiatric hospitals in the years 1940-43. Today, the same hospital converted into a memorial museum for the victims (Gedänknis Bernburg).

Bernburg southeast attraction is the impressive Renaissance castle Schloss Bernburg, extending its historical roots dating back to the year 961. Another popular attraction is the church of St. Stefani, originally built in 964, but got its present appearance in 1150.