Rental Car Berlin
RentaCarBestPrice.com compare prices from a number of car rental companies and find the best price on car hire. Book with us and get necessary insurance and unlimited mileage included in the price. 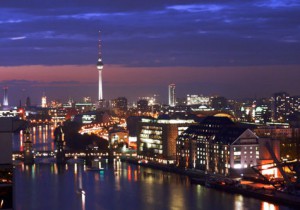 Berlin is the capital of Germany – located on the river Spree in the northeastern part of the country. With its 3.5 million inhabitants (4.5 million with suburbs included) is also Germany’s largest city.

Berlin is also a separate state, which in its entirety is located inside the nabodelstaten Brandenburg.

During the Cold War the city was divided in two – and the communist East Berlin was a relatively closed city. After reunification in 1990, however, the tourist flow increased significantly.

Berlin is known as a city with a very rich cultural life – and with many significant and exciting cultural institutions; museums, galleries, theaters, concert halls and opera houses. And when it comes to architectural sights, it is almost just pick and choose. The most visited attraction – and the most famous landmark in Berlin – Brandenburg Gate (listed between 1788 and 1791), which is at the end of the famous Unter den Linden. Also nearby is the State Opera Berlin (1743), and Stadtbibliothek Berlin (1774-1780).

Otherwise you have the famed shopping street Kurfürstendamm mentioned – and the Kaiser Wilhelm Memorial Church, located where the street ends, and that the tower destroyed during WW2. The tower has never been repaired, and the church today functions as a war memorial.

Berlin has two international airports. First is Berlin Airport – Tegel (TXL). The airport is 24 km northwest of downtown. Near the terminal E are car-center, and here are Avis, Sixt, Hertz, Europcar, Enterprise and Terstappen their offices.

Have to mention Berlin Airport – Brandenburg (BER) it’s still under construction and located next to Schonefeld airport.

Berlin Airport – Schönefeld (SFX) is 17 km south of downtown, and just outside the terminal A are a number of car rental companies – including Avis, Hertz, Sixt, Terstappen and Europcar.

Germany has a well developed road with good standard and good signage. Berlin is surrounded by the A100 motorway, which one can easily drive to other cities and towns. Many highways have free rate but it still recommended not to drive more than 130 km / h. In the center is the speed limit generally 50 km / h.

It is popular to drive by car to the city of Potsdam, located 39 km southwest of Berlin. Potsdam is famous for its many magnificent buildings, and both castles and castle parks UNESCO World Heritage Site. Sanssouci Palace from 1747 is the most famous, and was once the summer residence of the Prussian royal family.

The most beautiful view of Potsdam and region can be obtained by visiting the castle Belvedere – located on the hill Pfingstberg. The castle was built in 1863 and has two viewing tower and a wonderful garden.

With car hire in Berlin, you can also take a daytrip to the city of Leipzig, which is located 190 km southwest of the capital. Leipzig is a university city with about 530,000 inhabitants – and in the center you can visit the old town hall dating from 1557 – where there is also a Museum of the History. Nearby attractions Leipzig among others Nikolai Church from the 1100s, the 91-meter high monument “Monument to the Battle of the Nations” – in memory of the Battle of Leipzig in 1813, New Town Hall from 1905 Arts and Crafts Museum, Railway Museum, and Bach Museum. The city also has a great zoo and a botanical garden.