Rental Car Aschaffenburg
RentaCarBestPrice.com compare prices from a number of car rental companies and find the best price on car hire. Book with us and get necessary insurance and unlimited mileage included in the price. 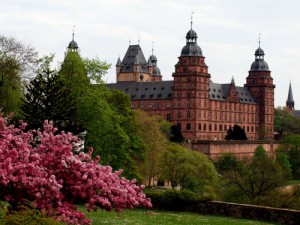 Aschaffenburg in Germany, having about 70,000 inhabitants, located northwest of the southern German state of Bavaria – at the river Main. In the early 1800s the city a short time a separate principality.

Aschaffenburg is often called the “Tor zum Spessart” (“gate to the Spessart”) – which is around 500 meters high åsrekke, where there are two popular natural parks.

The city’s earliest history begins in Roman antiquity, but it has several times since the Middle Ages been exposed before extensive damage – first under 30-year war in the 1600s, followed during WW2.

One of Aschaffenburg major attractions include Schloss Johannisburg – listed in the period 1607-1614 – which is located in an idyllic parkland. Another popular attraction is the 30-meter City Palace Schönburg Hof, built between 1673 and 1681, and that currently, inter alia, houses a natural science museum.

Nearest international airport is Frankfurt Airport in Frankfurt-am-Main, located about 46 km from Northwest of Aschaffenburg.