Rental Car Arles
RentaCarBestPrice.com compare prices from a number of car rental companies and find the best price on car hire. Book with us and get necessary insurance and unlimited mileage included in the price. 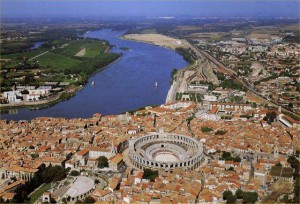 Arles is a city in southern France, 70 kilometers northwest of Marseille. The town is situated in the Rhone delta, and is the capital of the Ministry of Bouches-du-Rhône. About 53,000 residents live in Arles.

Arles is perhaps best known place where the world famous painter Vincent van Gogh produced some of his most famous paintings while he lived here. Arles history goes back to the year 700 B.C. When the city was an important Gallo-Roman city. The city has many memories from Roman times, including a Roman amphitheater that seats 25,000 spectators. It has been restored and here visitors can see bullfights and theater. Arles also has ruins of a Roman temple where the Venus of Arles (Louvre) was found. Here is also the Romanesque cathedral St. Trophime which was begun in 606, with famous sculptures from the 1100s. Several of the city’s sights are on the UNESCO list of World Cultural and Natural Heritage. Arles has annual photo festival.