Rental Car Altenburg
RentaCarBestPrice.com compare prices from a number of car rental companies and find the best price on car hire. Book with us and get necessary insurance and unlimited mileage included in the price. 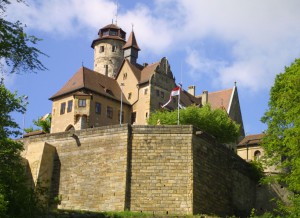 Altenburg is located in the middle of Germany – in the eastern part of the German state of Thuringia – the river Pleisse, and has about 37,200 inhabitants (2007). The town lies 39 km south of Leipzig, and is main town in the district Altenburger Land.

The city is best known for its production of playing cards, and has its own playing card museum.

Altenburg was first mentioned in the 900s, and has many historic tourist attractions.

City Hall from the 1560s is one of the most important renaissance buildings in Germany and one of the architectural monuments. Also Nikolai Church from the 1200s has many visitors – with its 45 meter high tower. The tower is open to the public, and from the top has great views over the city.

Other sights in the city are among others Altenburg Castle – where the main building is from the Renaissance and houses Playing Cards Museum, St. Bartholomäikirche – church with roots from the 1100s with the tower from 1659, Mauritianum – city Natural History Museum and the Lindenau-Museum – an exhibition of Italian paintings from the Renaissance. The museum has the largest collection in Europe outside Italy, where you can also see sculptures, reliefs and ancient artifacts dating from the 700s BC.

The city’s Brewery Museum is also a popular attraction, where visitors can learn more about beer production and the brewery’s history.