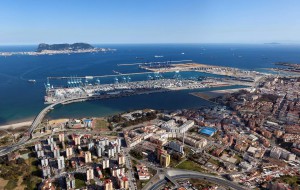 Algeciras is a port city in southern Spain, and is the largest city on the Bay of Gibraltar. The Port of Algeciras is one of the largest ports in Europe and in the world in three categories: container, cargo and transhipment. It is located 20 km north-east of Tarifa on the Río de la Miel, which is the southernmost river of the Iberian Peninsula and continental Europe. In 2012 it had a population of 116,917 people. It is the largest city among its metropolitan area, which includes the municipalities of Los Barrios, La Línea de la Concepción, Castellar de la Frontera, Jimena de la Frontera, San Roque and Tarifa, with a population of 263,739.