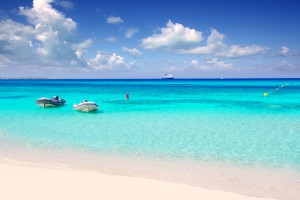 The main island of Formentera is 19 kilometres (12 mi) long and is located about 6 kilometres (4 mi) south of Ibiza in the Mediterranean Sea. More specifically Formentera is part of the delimitation of the Balearic Sea which is a northwestern element of the Mediterranean Sea.Its major villages are Sant Francesc Xavier, Sant Ferran de ses Roques, El Pilar de la Mola and La Savina.

Formentera comprises one municipality, also called Formentera, and has a population of 9,962 (as at 1 January 2010). Its land area is 83.24 square kilometres (32.1 sq mi). It is subdivided into several civil parishes (parròquies), themselves subdivided into vendas (véndes in Catalan).

North of Formentera is the island of Espalmador (Illa de s’Empalmador in Catalan), which is the second largest island of the municipality, and is itself surrounded by a few minor islets. Espalmador is a tombolo, separated from the main island of Formentera by a shallow sandbar, and during low tide, it is possible for one to wade between the two islands. This area is a popular stopping point for those in yachts heading between Ibiza and Formentera.

Formentera is a small island that attracts visitors with the incomparable beauty of its beaches and coves, but also has other attractions.

Faro de la Mola located at the highest point of the island, the Faro de la Mola is the oldest and most important of Formentera. Built on the orders of Queen Elizabeth II on a cliff 120 meters high, the lighthouse shines every night the steep end of the island since 1861.

Salinas Park located between the islands of Ibiza and Formentera, the Natural Park of Las Salinas is a protected natural space formed by a rich ecosystem in which live numerous endemic animal and plant species.

The park is composed of unrepeatable landscapes and has beautiful beaches as Ses Illetes.